Can you identify these choir members from 1965? 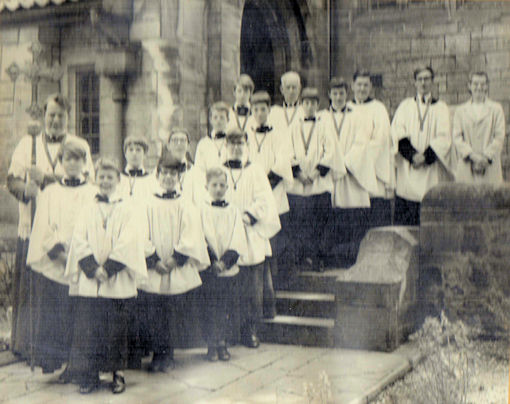 If you can identify any of the members of the choir in this 1965 photograph, and can provide information on where they are now and what they are doing, please email newsletter@allsaints-standrews.org.uk.

For many years Marjorie (Betty) Bancroft taught at St Katharine’s School (the junior part of St Leonard’s School) and lived and looked after her mother up in the “New Town”. When she retired she returned to her roots in Whitby where she had been a pupil at St Hilda’s School.

When I arrived at St Andrews as an undergraduate at the University (having, of course, been brought up at All Saints’ as a boy and singing in the choir under Dr Dorothy Douglas), I met Marjorie Bancroft who was the Organist at All Saints’. My father encouraged me to be the Choirmaster with Betty as the Organist.

The Choir was very small at this time (1965) with only old faithfuls George Carruthers, John Nott and ? Gourlay in the back row. I then set out to find more choirboys including 2 Kerachers, 2 Giffords, a Thompson (Hepworth’s), Bobby McCabe, Jimmy Lister, Iain Macdonald, Stuart Downie and ? Zokowski.

When I first took over the Choir I found two Roche boys who lived in Lamond Drive, and the attraction for them and the other early members was playing in the gym after choir practices. Later on with the help of Jimmy McCabe we took Johnny Stewart, Jimmy Lister, Bobby McCabe and Iain Macdonald to camp and climb the hills at Glenalmond (my old school).

Betty Bancroft was our faithful organist throughout those years (1965-1969) and her love of crossword puzzles may possibly reveal her background as, I believe, a wartime worker at Bletchley Park helping to break Nazi signals and Enigma codes.

As well as singing the services on Sunday and special Saints’ Days the Choir performed concerts of anthems with Betty playing magnificently on the organ. You will see her cheerful face in the photograph above.