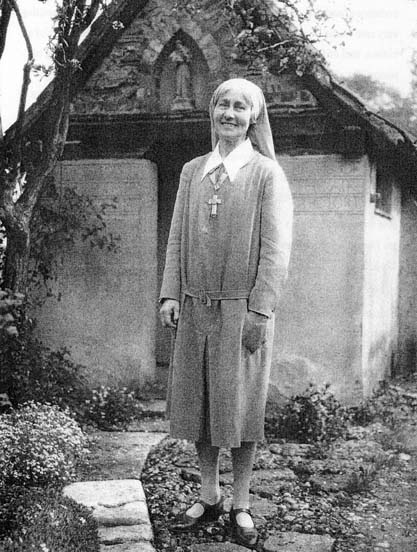 Evening Prayer today commemorates Lucy Menzies, to whom a memorial tablet is placed here in our chapel. She was godmother to John Hunter who with his wife was also a long-standing member of the All Saints’ congregation, and supported Bishop Wilson in his various ministries. Bishop Wilson himself is commemorated by a window in the choir area, and his daughter, Marie-Louise Moffet is still a regular worshipper here. In commemorating Lucy we celebrate many who have been part of the life of All Saints over the generations.

Lucy herself was born in 1882 into the family of Allan, a Church of Scotland Minister who was to become Professor of Biblical Criticism here in St Andrews University. Lucy and her elder sister, Mary, were educated at home, with the family taking their holidays in a cottage in Iona from many years from 1888 onwards. This was the beginning of Lucy’s great love for the island, and one of her first books was a life of St Columba, first published in 1920, revised in 1949 for the Iona Community, and reprinted in 1954, a momentous year in which she became the first woman to be awarded an Honorary Doctor of Divinity degree by St Andrews. As it happened, this was also the year of her death on 24 November.

That book on St Columba was reviewed anonymously in the Westminster Gazette, and Lucy discovered that the reviewer was no less than Evelyn Underhill, herself about to commit herself publicly to the Church of England, and a significant influence on Lucy’s decision to become an Episcopalian. They began a correspondence, became firm friends and trusted colleagues. Lucy recalled that ‘Her writings opened a new world. No one ever made me conscious of God as she did.’ And of their first actual meeting, Lucy wrote that ‘Intimate talk was easy, and I came away on wings, knowing I had found a true and lasting friend.’ Evelyn’s own death in 1941 was a severe loss to Lucy to whom she had become a trusted adviser in Lucy’s own spiritual growth, and a support in her extensive writings, making her Warden of the House of Retreat at Pleshey in Essex at which Evelyn pioneered retreats in the pre-war years. For this Evening Prayer we have included two passages from Lucy Menzies’ 1928 book dedicated to Evelyn Underhill: Mirrors of the Holy.

We now turn to Evening Prayer

Therefore I prayed, and understanding was given me. I called on God and the spirit of wisdom came to me. I preferred her to sceptres and thrones, and I accounted wealth as nothing in comparison with her. Neither did I liken to her any priceless gem, because all gold is but a little sand in her sight, and silver will be accounted as clay before her. I loved her more than health and beauty, and I chose to have her rather than light, because her radiance never ceases. May God grant me to speak with judgment, and to have thoughts worthy of what I have received; for he is the guide even of wisdom and the corrector of the wise. For both we and our words are in his hand, as are all understanding and skill in crafts. For the word of the Lord: thanks be to God.

A reading from Lucy Menzies on the life of Mechthild of Magdeburg, concerned with her life in 1224:

‘It was when she was about twelve years old that she received her first “greeting from the Holy Spirit,” a greeting “repeated day after day and filling her with love and sorrow.” The centre of her interest was changed from that time; but although the world no longer had a first claim on her, seeing that she now looked beyond it, Mechthild never became austere or withdrawn from her fellow-beings. She “saw God in all things and all things in God.” As her Flowing Light said to her: ‘I come to my love/As dew on the flowers.’ (i.13.) As a young girl she longed to be despised, “without any fault of her own.” The spirit of the mendicant friars seems to have smitten her, for when she left home at the age of twenty-three to lead a life of “rapt religious mendicancy,” renouncing worldly honour and riches for Christ’s sake, it was not long after the deaths of Francis and Dominic; the world still rang with their words. Elizabeth of Hungary had just died in her Franciscan habit after a life sacrificed to God and His poor. These examples must have meant a great deal to Mechthild.’ (pp.28–29).

The second reading is from the Gospel according to John 16.12–15.

A reading from Lucy Menzies on the life of Catharine of Siena, aged thirteen in 1347:

‘One day her father happened to come upon her when she was praying: the legend says that he saw a white dove hovering over her; at any rate he suddenly realized that her desire for a religious life was not self-will but vocation. She was then allowed to join the Dominican Sisters of Penance, sometimes called the Mantellate, because of their habit, “a white robe of innocence covered by a black mantle of humility.” These religious were bound by no vows and continued living in their own homes. The Order had been instituted for widows; Catharine was the first unmarried member and was only allowed to join because she was not too good-looking! She was now allowed a room of her own, and child as she was, she began her life of willed expiation by a three years’ retreat in her own room. It is difficult for us to realize the horror of the times in which she lived. Plague and war and famine had left behind them a recklessness which led to all manner of immorality, and Catharine was stricken to the heart by the awful lives she saw around her. There was no self-righteousness in her attitude; she felt that her own sins had contributed to the general downward tendency; that as she had been given grace to recognize the better way, she ought to have been able to help her neighbours to avoid sin. This doctrine developed in her with the years, but the germ was there from the beginning, when she began in her own room to live that mingled life of austerity and communion with the Divine which her fellow-citizens regarded as supernatural. For three years she only left her room to go to Mass and only spoke when told to do so by her confessor. Hers could not have been a quiet room for the house, as we can still see, was a small one and the Benincasa family was large and patriarchal in habit; not only children but grand-children lives under that elastic roof. But Catherine, as her legend tells us, “found a desert within her own home and solitude in the midst of people.”’ (pp.122–123).

Almighty God, who enlightened your Church by the teaching of your servant Lucy:
enrich it evermore with your heavenly grace
and raise up faithful witnesses who,
by their life and teaching,
may proclaim the truth of your salvation;
through Jesus Christ your Son our Lord,
who is alive and reigns with you,
in the unity of the Holy spirit,
one God, now and for ever.
Amen.